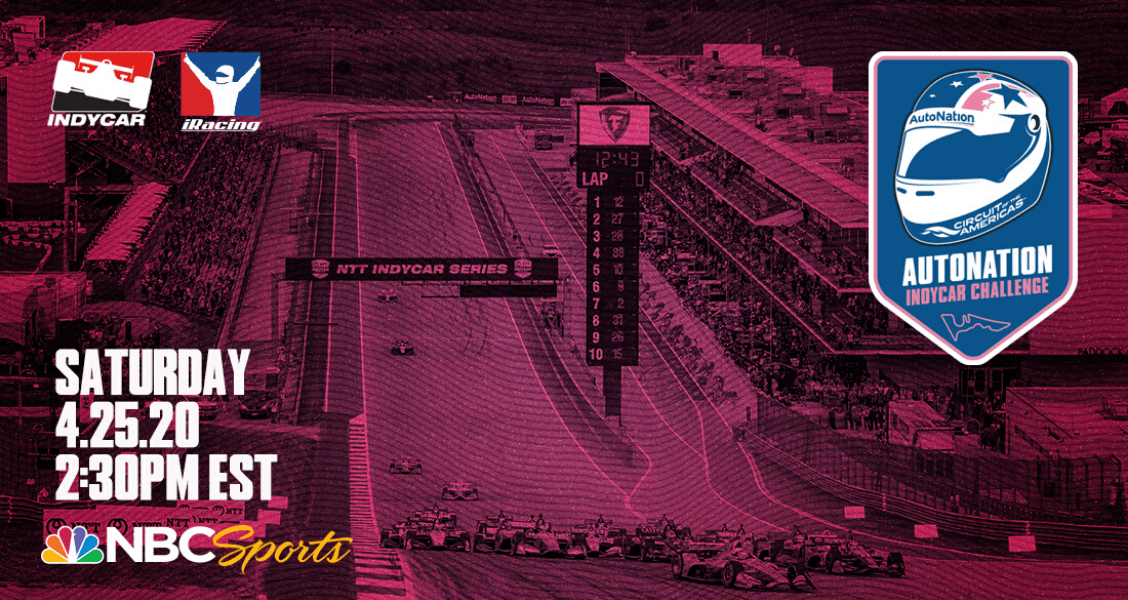 AUSTIN, TX (April 24) -- The INDYCAR iRacing Challenge returns to a natural road course after two consecutive oval races with the AutoNation INDYCAR Challenge at 2:30 p.m. ET Saturday, April 25 at virtual Circuit of The Americas (COTA). The 32-lap race on the 20-turn, 3.427-mile circuit at COTA, located in Austin, Texas, will be televised live on NBCSN. With just two rounds remaining, it’s time to find out who is the true king of the virtual INDYCAR road.

A 33-driver field will take the green flag in Round 5 of the six-round series featuring NTT INDYCAR SERIES stars and special guest drivers. COTA was scheduled to host an NTT INDYCAR SERIES round Sunday, April 26, an event canceled due to the COVID-19 pandemic.

Entry List: The AutoNation INDYCAR Challenge at Circuit of The Americas

Two new faces from outside the NTT INDYCAR SERIES will be among the bumper crop of talented drivers in the field Saturday. Englishman Lando Norris will drive the No. 04 Arrow McLaren SP Dallara. Norris finished 11th in the Formula One World Championship standings last season for McLaren and is returning for a second season with the iconic F1 team. Rising star Norris, 20, is an avid sim racer and one of the most popular and engaging F1 drivers on social media. Australian Chaz Mostert will drive the No. 98 U.S. Concrete/Curb Dallara for Andretti Herta with Marco Andretti & Curb-Agajanian, racing from his home in Australia in darkness during the early hours of morning. 2014 Bathurst 1000 winner Mostert, 28, has 13 career victories in Virgin Australia Supercars and drives in that series for Walkinshaw Andretti United.

2016 NTT INDYCAR SERIES champion Simon Pagenaud won the last two rounds, on ovals at Michigan International Speedway on April 11 and at Twin Ring Motegi on April 18. He isn’t too shabby on road courses, either, finishing sixth in the series opener March 28 at Watkins Glen and fifth April 4 at Barber Motorsports Park.  Reigning Indianapolis 500 presented by Gainbridge winner Pagenaud again will be one of the favorites to win Saturday in the No. 22 Snap-on Team Penske Chevrolet.

Mostert also could become the latest native of Australia or New Zealand to make headlines in the INDYCAR iRacing Challenge.

2014 NTT INDYCAR SERIES champion Will Power has been a steady presence on or near the podium for all four rounds. Australian Power has finished third, second, fourth and third, respectively, in the No. 12 Verizon Team Penske Chevrolet.

2018 Indianapolis 500 winner and veteran sim racer Power appeared to be headed for his first victory in the series last Saturday at Motegi before he was entangled in a late-race collision. Could this be the week he finally stands atop the podium? He won the pole for the inaugural NTT INDYCAR SERIES race at COTA in March 2019, and his sim racing speed has proven to be just as quick as in the real world.

Two-time reigning Virgin Australia Supercars champion Scott McLaughlin has been the revelation of this series. New Zealand native McLaughlin was impressive during actual preseason testing for Team Penske and was scheduled to make his NTT INDYCAR SERIES debut May 9 in the GMR Grand Prix at the Indianapolis Motor Speedway before that event was postponed to July 4 due to the COVID-19 pandemic.

McLaughlin has been an ace on road courses in the INDYCAR iRacing Challenge, finishing fourth at Watkins Glen and winning at Barber. Like Mostert, McLaughlin once again will race in the middle of the night from his home in Australia in the No. 2 Shell V-Power Team Penske Dallara.

Five-time NTT INDYCAR SERIES champion Scott Dixon is another driver emerging as a standout in this series. New Zealander Dixon finished a strong second to Pagenaud last Saturday on the Motegi oval after finishing 16th and 30th in his first two starts in the No. 9 PNC Bank Chip Ganassi Racing Honda.

Unlike many of his rivals, 2008 Indianapolis 500 winner Dixon had little to no sim racing experience before joining the INDYCAR iRacing Challenge for Round 2 at Barber. But he has shown the same quick adaptation skills and speed in the virtual world that he has for nearly 20 years in INDYCAR competition.

Among drivers from other parts of the world, American Sage Karam also should be a contender for victory. Veteran sim racer Karam won the opening round of the series at Watkins Glen in the No. 24 DRR WIX Filters Chevrolet and has led 67 of the 90 laps so far on road courses.

A glance at the past also could pinpoint two contenders for victory Saturday.

Colton Herta made global motorsports headlines in March 2019 by winning the inaugural INDYCAR race at COTA, becoming the youngest winner in series history, at age 18. Herta, now 20, will drive the No. 88 Capstone Honda on Saturday.

Oliver Askew swept both Indy Lights presented by Cooper Tires rounds last February at COTA en route to the series title. Askew will race his rookie season this year in the NTT INDYCAR SERIES for Arrow McLaren SP and will line up on the virtual grid at COTA in the team’s No. 7 Chevrolet.

Another Indy Lights champion, 2015 title winner Spencer Pigot, will make his series debut in the No. 45 Mi-Jack/EMBRACE Pittsburgh RLL with Citrone/Buhl Autosport Honda.

The fuel window for this 32-lap race is approximately 15 to 16 laps. But it should be a one-stop race due to a competition caution period on Lap 12, a feature carried over from Round 2 on the road course at Barber that bunched the field and increased and intensified the wheel-to-wheel action.

A 10-minute qualifying session will set the starting lineup prior to the event.

One race remains in the six-round series after Saturday, a non-INDYCAR “Dream” track May 2. The INDYCAR iRacing Challenge will not crown an overall champion but will add a special element where INDYCAR will make a donation to one of its partner charities.

ABOUT CIRCUIT OF THE AMERICAS:

Experience the unfiltered thrill of being alive at Circuit of The Americas, in Austin, TX.  Feel the rush of the world’s greatest drivers competing in motorsport’s biggest events.  Get lost in the music of the hottest musical acts as they perform live at Austin’s largest outdoor music venue. Take charge of your own 602 horsepower race car as part of our exciting driving experiences. Experience the thrill of racing others at the COTA Karting track. Inspire your most valuable stakeholders in our expansive meeting and hospitality spaces designed for large groups and private or corporate events. At Circuit of The Americas there is fun at every turn.

For more information and to download videos and photos, visit www.thecircuit.com. For an experience as unique as Austin and a rush you’ll never forget, visit Circuit of The Americas, where exhilaration happens!